Marita Dachsel is a poet and mother of three.

Over the past six years, she has 1) moved house from Vancouver to Edmonton to Vancouver to Victoria; 2) published her first trade collection All Things Said and Done (Caitlin Press, 2007) as well as the chapbook Eliza Roxcy Snow (Red Nettle Press, 2009); and 3) written Electric Company: Initiation Trilogy, three theatrical installations based on poetry collections by Marita, Elizabeth Bachinsky, and Jennica Harper that was performed at the 2012 Vancouver Writers Fest. 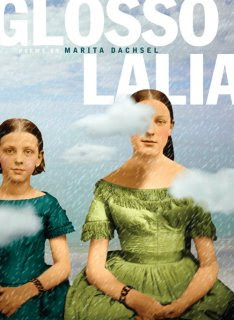 All while reading/thinking/writing her way into the poems that would become Glossolalia, her second collection (Anvil Press, 2013).

What do you want people to know about Glossolalia?

Other than what’s written on the back of the book, I’d like people to know that it’s a work of the imagination, but based on research. That doesn’t sound very exciting though, does it? There’s a bit of sex in there, too. Everyone likes sex, right?

Have you ever been to Winnipeg? What have you heard?

Unfortunately, I have not yet made it Winnipeg, though I hope to soon. I had a fantasy a few years ago that I’d move there. In my imagination, it is a magical place, reminiscent of the great American cities—Detroit, Philadelphia, Pittsburg. Gritty and working class, but rich with history, culture, and diversity. I’m also a huge fan of Guy Madden, so of course my Winnipeg is also black and white, everyone dresses as if in the 20s or 30s, and it’s full of Icelanders and sexual deviants.

As a writer (i.e. someone whose artistic practice is predicated on time spent alone) how do you approach performance? What do you get out of it?

I used to not like doing readings at all, but I’ve grown to really enjoy them, at least once I’m up there on stage. I’m still a mess of nerves beforehand. When I was at the Writing Studio in Banff a few years ago, I was fortunate to work with the late Colin Bernhardt. He was incredibly inspiring and taught me so much about voice, performance, and reading. I have his photocopies of warm-ups and in my ideal world, the hour before a reading, I am alone and working through the exercises. They ground and focus me. I like to have time to calm myself beforehand, but that’s not always in the cards.

If I do well, I get a rush, an endorphin hit that’s always nice, but truly the best thing about readings is connecting with other writers and readers. I love to see how others react to the work, how they connect to it, and participating in the ensuing discussion. It’s so rewarding.

Right now I’m reading Jan Zwicky’s Forge, and am slowly working through Marilynne Robinson’s essay collection When I Was a Child I Read Books. I’m about halfway through Emily Perkin’s The Forrests, but will start Saleema Nawaz’s Bread and Bone as soon as I can get myself to a bookstore.

My writing is quite sporadic at the moment. I had worked on Glossolalia for six years and it’s strange not to have a project. I’m writing ideas towards poems and essays, but I don’t have a specific project on the go. I’m untethered—it’s both liberating and terrifying, so a good place to be.

So you’re an agnostic feminist poet married to a playwright. Why is polygamy in the context of what could be termed a religious sect so fascinating for you? Put another way, why is belonging so alluring?

I grew up in a small family. Both my parents emigrated to Canada as adults, so other than my sister and my parents, I had no family in North America. My mother would tell me stories about her large extended family growing up and it felt like I was missing out on something. From the outside, large families always seemed so joyful, so rewarding.

I don’t belong to an organized religion, but there are times I wish that I had that kind of faith. I can’t think of anything more comforting than being surrounded by a network of people who share your beliefs and values, who care and love you—family on a larger scale.

Mormon polygamy is the section in the Venn diagram of belonging to family, faith and community. It’s all three. A large part of their doctrine concerns the everlasting family, so you have these large families where you could be one of dozens and dozens of siblings, which sounds to me like a wonderful way to grow up. You live in communities of like-minded folk.

Now, of course, this is the idealized version of it. The reality of the situation is much different, as we all know that families can me messy, that homogeneous communities can be dangerous, that faith can be complicated, but that still doesn’t stop me from idealizing what it could be.
Posted by Ariel Gordon at Sunday, May 05, 2013

Email ThisBlogThis!Share to TwitterShare to FacebookShare to Pinterest
Labels: Out of Town Authors