This is my third summer volunteering for Fruit Share.

A week or so ago, I signed up for a chokecherry pick, which was sort of serendipitous because I'd recently returned from a trip to Asesseppi Provincial Park where the wild chokecherries had been ripe. 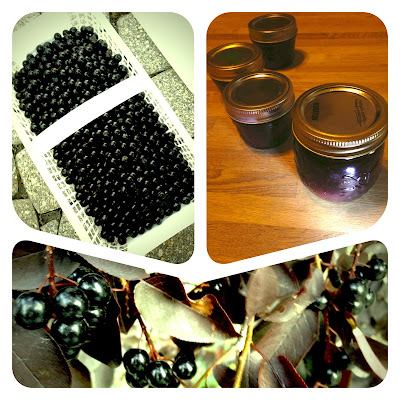 So I refrained from picking but retained an image of beatiful purple chokecherry syrup, which a bunch of people on my FB page had raved about.

Anyways, the chokecherry pick happened to be my first of the season, so I was looking forward to the easy comraderie that seems to come from chatting whilst-in-a-tree.

I arrived, talked to the homeowner, and set up my ladder. Twenty minutes later, I was still the only picker present. I checked my email and discovered that the other two pickers wouldn't be able to make it.

And there I was with four trees full of chokecherries, which take some time to pick.

After frantically and unsuccessfully trying to find friends to come help, I picked until it was dark and left with about 5 litres of fruit.

Normally, when on group picks, I volunteer to deliver the third of the harvest that Fruit Share mandates goes to community groups. And, because it's convenient to my house, I usually drop the fruit at Resource Assistance for Youth (or RaY) on Sherbrook, an organization that works with homeless youth.

But this pick was different. First, it was late, and I knew that RaY only accepts donations during the day. Second, although chokecherries look appealing, they are not a fruit to be eaten directly off the tree.

They've got a strange tart flavour and a furry texture, but more than that, the stones are poisonous: "It is thought that the leaves, twigs, and stones of both wild and cultivated species contain cyanide-producing glycoside." (Nova Scotia Museum).

RaY likes fruit that can be put in a bowl and grabbed whenever the youth they serve are hungry. So apples are fine, but crabapples, for instance, are sort of useless. (I convinced someone working in the kitchen once that it was easy to make applesauce out of the crabapples when it looked like they were going to reject my donation...)

Berries that not only have to be processed but that also are actually poisonous when eaten raw would NOT have gone over well.

So I slowly processed the berries over the next few days, making both syrup and jam. I used the Mennonite-grandma recipe my co-worker shared with me and was happy with the results.

But I still had about a third of the berries left last night. And I decided to make jam out of it and then drop the jam off at RaY some time this weekend.

My solution doesn't meet the letter of the Fruit Share rule ("Take 1/3 of the fruit to a community organization of your choice within 24 hours.") but I think it obeys its spirit.

In other news, I've a couple of Fruit Share picks coming up tomorrow, apples and, also, veggies from a u-pick-it farm. It'll be a busy Saturday, but I find climbing into trees very satisfying.

For years, I always felt like I was missing out on local fruit and veg. I don't garden, beyond a small kitchen garden, and our property isn't large or sunny enough to support a fruit tree.

I always tried to hit farmer's markets and stores that carry local produce, but since joining Fruit Share (and signing up for a share via Jonathan's Farm, a CSA that delivers to Wolseley), I know I will always have lots of local fruit and veg.

My thanks to Fruit Share for existing and to Eudora, whose chokecherries they were, for registering her trees!

Email ThisBlogThis!Share to TwitterShare to FacebookShare to Pinterest
Labels: Fruitshare

"So apples are fine, but crabapples, for instance, are sort of useless."
I love this.

Great post, Ariel! Love having you be part of Fruit Share. And love the way you found a gracious and considerate way to share 1/3 of the chokecherry harvest. That's truly capturing the spirit of Fruit Share!

So what is the recipe for chokecherry syrup and jam.