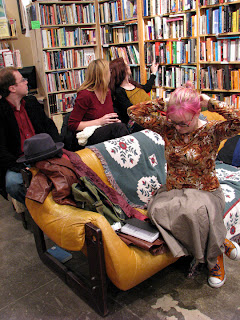 Natalie Zina Walschots arranges her hair, pre-reading. The poets (Melanie Brannagan and Mariianne Mays) and and the poet-lover (who shall remain nameless) in the back row appear to be averting their eyes but they are really only examining a title on the bookshelf.

Aqua owner Kelly apparently wasn't feeling well, but you couldn't tell by his hosting, which included much of the usual tomfoolery as well as gentle mockery of the definitely-not-title-case titles of the magazines and anthologies the readers had thus far contributed to...

It was a smallish crowd but the authors performed to the back of the room and when they were done, there was lots of room for good chat, for instance when Dennis Cooley assured me there are generally only three or four days between finishing a manuscript and publishing it... 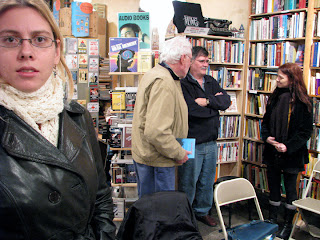 I bought Ryan and Neil's books (Natalie had sold out somewhere earlier on the tour and was hoping that the box her publisher sent to Winnipeg would arrive in time for the event, but no luck and no nippleclamps for us) but also a book called the Encyclopedia of Ignorance (essays by scientists edited by poets!) and two A.A. Milne chapter books (for Aa, who at least is obsessed with something palatable). 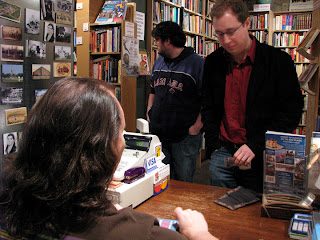 Bookseller Kelly's raven locks sell books to the poet-lover (still nameless) while William Neil Scott, who goes by the name of Neil, looks on nonchalantly...

Kelly also presented me with a fridge magnet of a Thomas Edison advertisement. I'm currently embroiled in Edison research for the chamber opera I'm collaborating on with David Raphael Scott but that's a whole different post...

Email ThisBlogThis!Share to TwitterShare to FacebookShare to Pinterest
Labels: free your mind, news

Sounds like fun! (I had a dream about Robert Kroetsch last night, even turned it into a poem).

What kind of dream are we talking? Was it a falling dream (you didn't fall on Robert Kroetsch, did you?)?

Exceptionally glad to hear you're finding time for poems...

It wasn't a falling dream, and I wasn't spilling wine on him either (as I did this summer). It was a language dream. A dream of signs. One of the weird dreams that carries the ethereal message, even though the details of the dream disappears. An echo.

Signs and wonders, then...