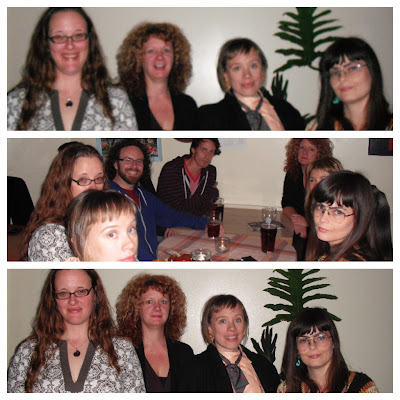 So the Double Down Tour consisted of six readings in eight days.

But we had almost three days in Toronto and only did a reading one of those days, so we got to see/do things.

Do things, you ask. Aren't you meant to be working on this g-d tour?

I was actually supposed to be reading thru the titles I was reviewing for October's WFP poetry column but never pulled a single book from my bag. Sigh.

Instead, we went to Jack Whyte's launch at the Dora Keough, which featured a scotch tasting, a singing author, and a folk band with a bagpiper.

(Jack Whyte's sporran had a beady-eyed badger on it. Which was LOOKING at me.)

The next day we hit Kensington Market. And then, after we'd gotten our fill of vintage/hippy stores, made our way to the Holy Oak Cafe.

The event included a geographical quiz composed by host Ibi Kaslik (winners got jam!) based on the home town of each of the readers. And the room was charming and the other readers were charming and Lee Maracle sat the back of the room and laughed at all my jokes, the ones in the poems and the ones I told between poems. And that was more than enough.

The next day, we hit the AGO and I spent the whole time (okay, I also nipped over to the Shary Boyle exhibit...) in the Ken Thompson collections.

Specifically, the ivories and the model ships. Both reminded me of mushrooms, with their impossible tiny oddities. And two hours amidst them nearly made me weep. And know, again, how terrible and wonderful people are.

Thanks to Ibi Kaslik for organizing everything, even these pics. Thanks too to Don Robinson and Craig Saunders for all the (unearned) hospitality.
Posted by Ariel Gordon at Tuesday, November 16, 2010